As we promised you earlier that on this forum we are not going to present you guys the same typical and boring material that we usually see done with the crochet but we are going to explore some new horizons of creations this time. And I am more than sure than the stuff presented here would be applauded by you guys as we are very specific in the selection. Now enjoy some stylish amazing crochet shoes and slippers. Here mostly we would work on the reclaimed shoe soles and the whole upper would be created with the crochet following different patterns and designs.

I just wondered to start with this adorable slipper and as we already mentioned that mostly we would be working on the reclaimed shoe soles and mostly the upper would be made with the crochet because pure crochet thing isn’t that strong at all to stay erect.

Just look at these cute naked sandals or pumps, they have got very pretty floral embellishments on the front and sides. Other than the crochet we have used these tiny silver beads too to make it look more girly stuff and also to enhance the outlook. 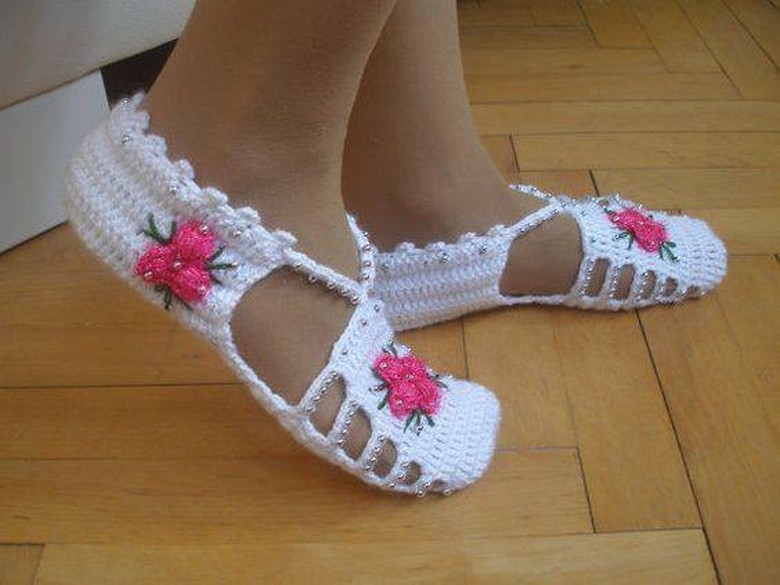 These are really very nice sandals indeed. Nobody would be able to judge that whether this is an expensive pair bought from some branded store or a mere indigenous crochet creation because we have used very thick stitch inside the circles making them firm enough to stay erect. Also the shade has made the considerable contribution. 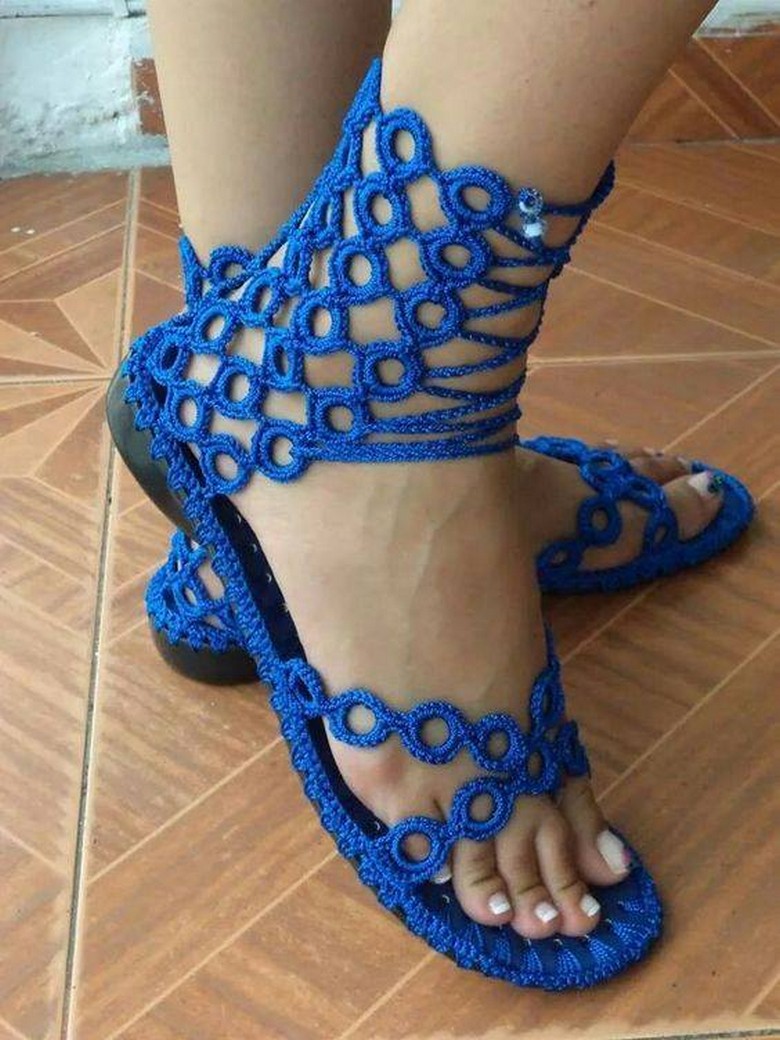 Just imagine wearing a sandal or any other pair made with the crochet thread. Just feel the warmth in the winter and the comfort throughout the year. Seeing at this pair just make a comment, are they any lesser than the branded one? Infact far better than them. 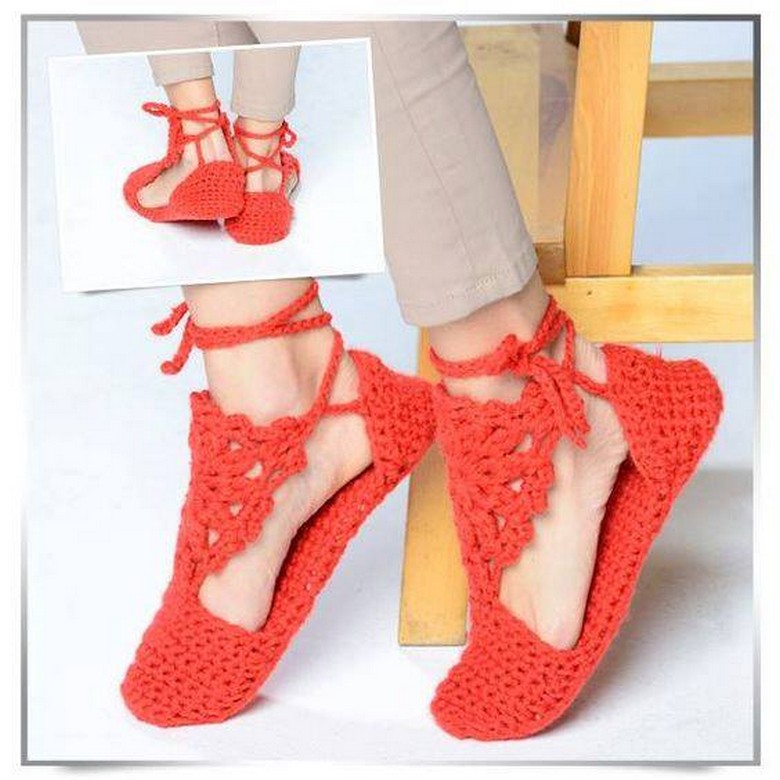 Well, these slippers were actually completely reclaimed here. They were just so dull look wise that we just wanted to add some embellishments. We could have added some beads and pearls and that typical stuff but rather than that we opted for this crochet flower option. 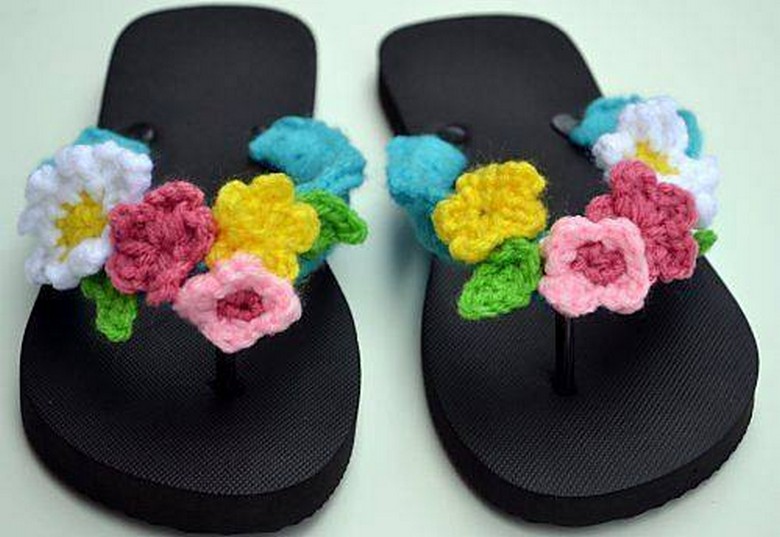 Just look at the skill and fineness of this one, even I couldn’t figure out initially that this was done with the crochet. On having a detailed and closer look I realized this. This would just go perfect with jeans and tights or any other casual outfit while going out casually. 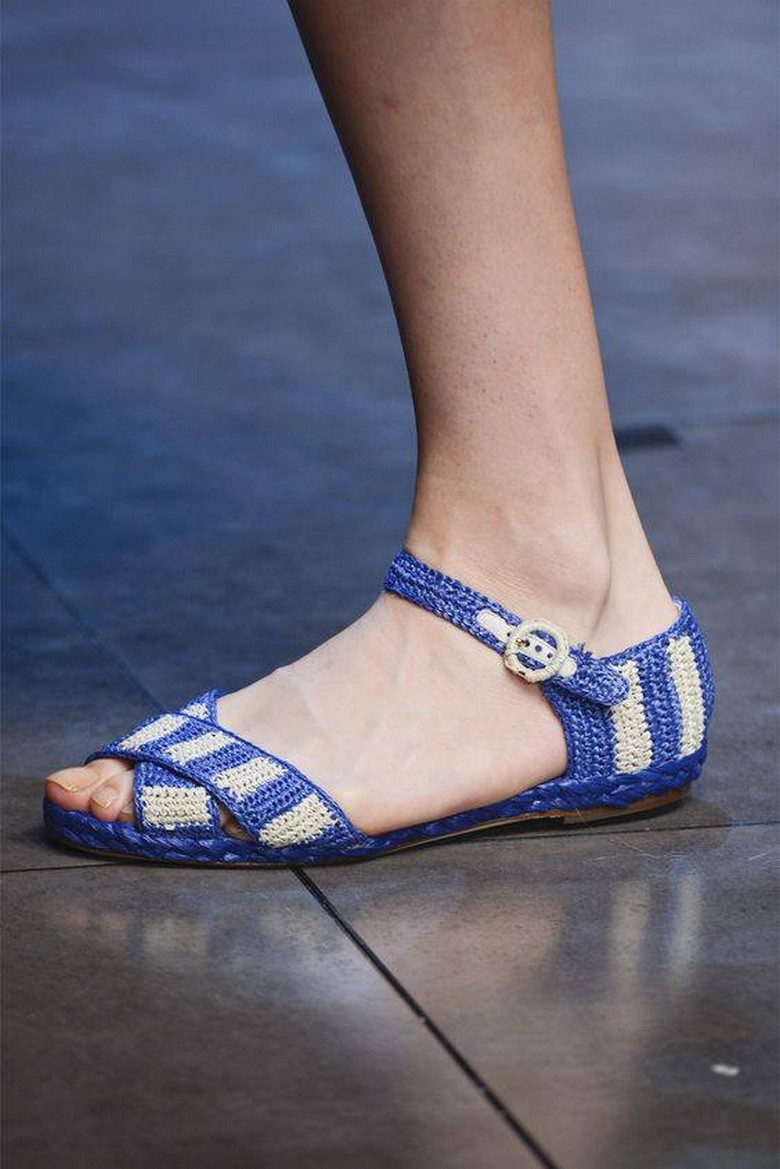 Okay, looking at the multi colors of these awesome booties, this is not hard to figure out that they were meant for the kids or the school going teens. As they are always in love with colors, but this is undoubtedly a very complicated pattern made by some mentor. 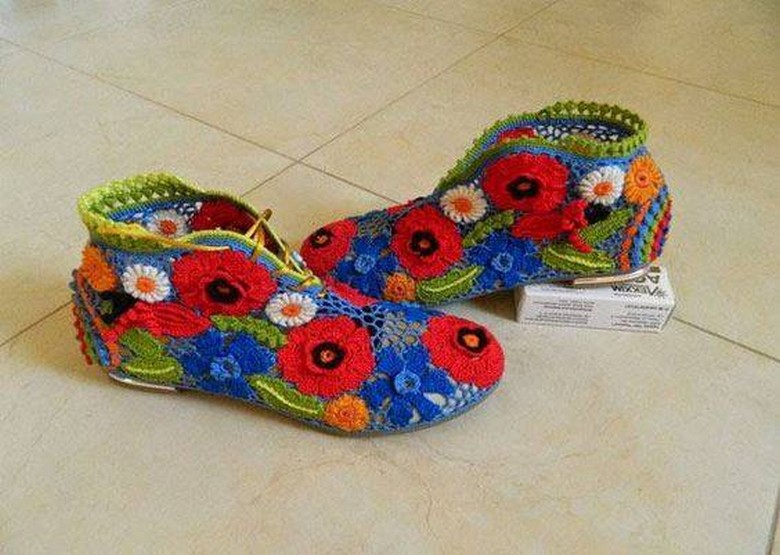 Although there is some roughness and rawness in this specific pair. But the good thing is that entire upper of the sandal is made purely with the crochet thread and no other material is added here. And still it made a perfectly nice casual pair. This would look awesome with some semi formals. 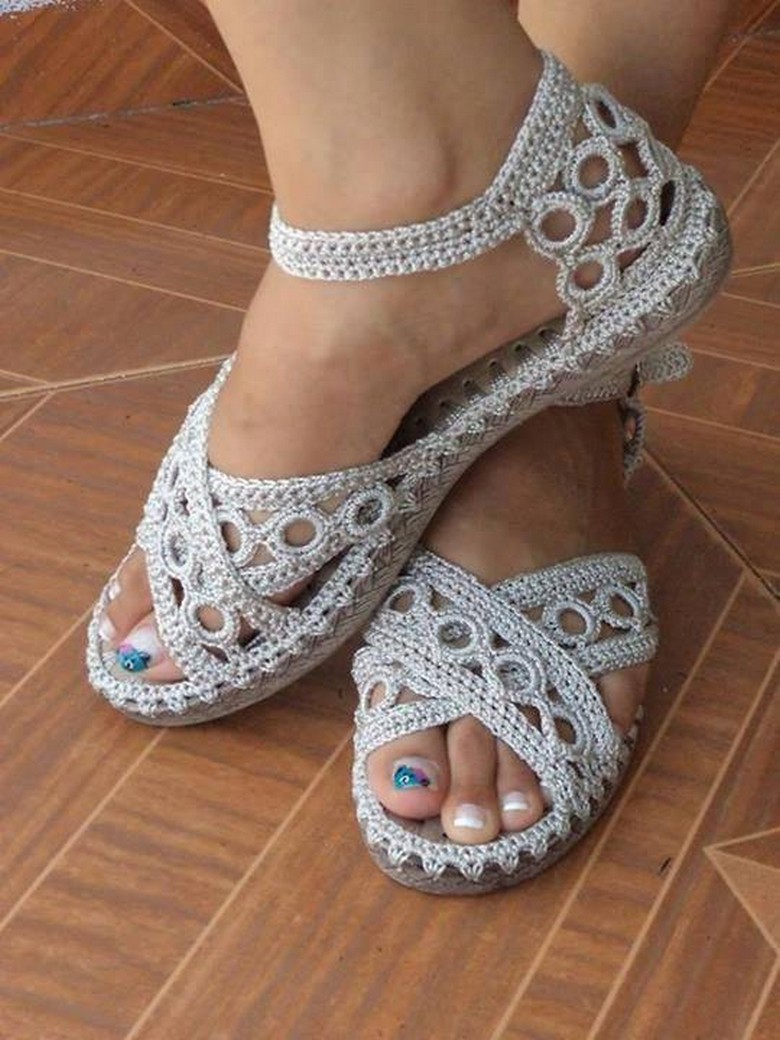 Again these multi colored heels are meant to target a certain type of people according to their age group and taste. I am talking about the young teens who are obsessed with colors and multi shaded accessories, then this is purely their cup of tea. Just count it. 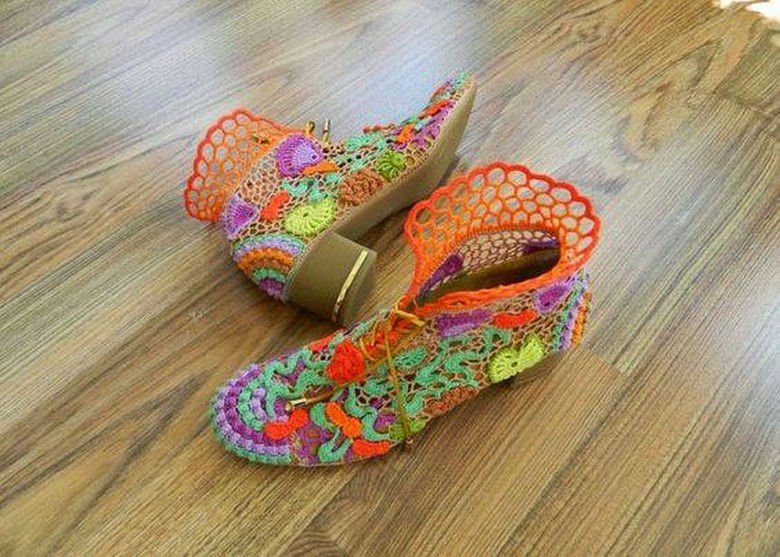 Again we have got the same sneakers but this time with a changed pattern and combination of threads. We have also used some pearls and stones in this one. Only the laces were the thing that we had to match and buy from the market other than that this is a pure crochet work. 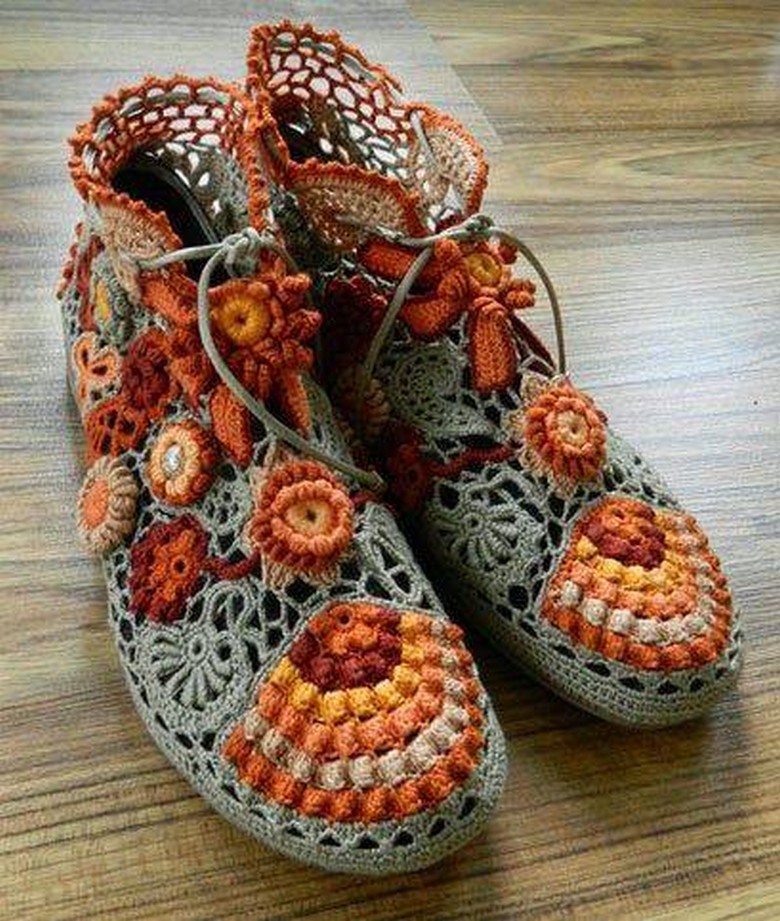 Now these are clearly some vintage sandals that would look good on some aged women. I know none of you would be ready to make herself count as the older one yet you have to decide your footwear according to your age because in that part of age you cannot go for the fancy options. 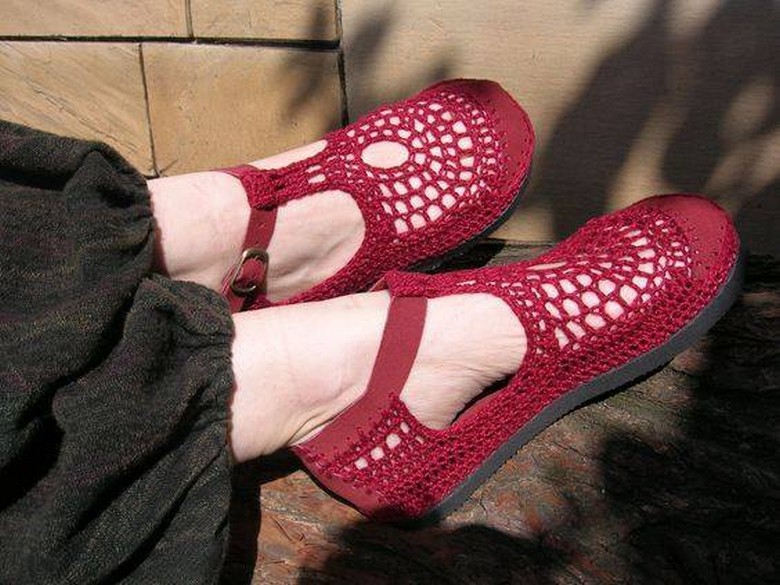 This is obviously one of the best heels that I have ever seen. The whole foot is covered in the crochet made netting or the upper of the heel. And obviously very higher rank of skill was to be shown here to bring the perfection and flawlessness. 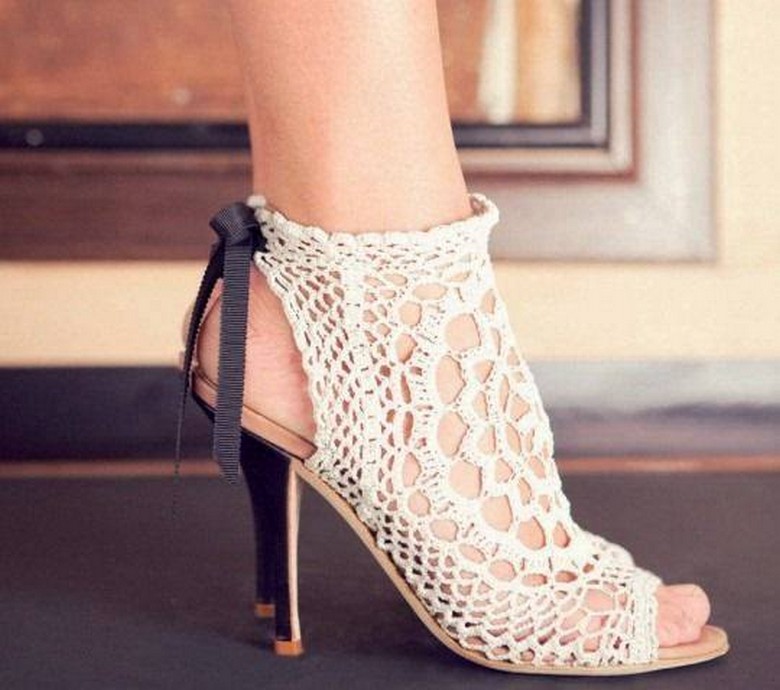 I guess the most critical thing in this crochet made show making is the measurement because this is not a simple crochet creation that you can place anywhere or fit to anything, here you have to take care of not inches but the centi meters. 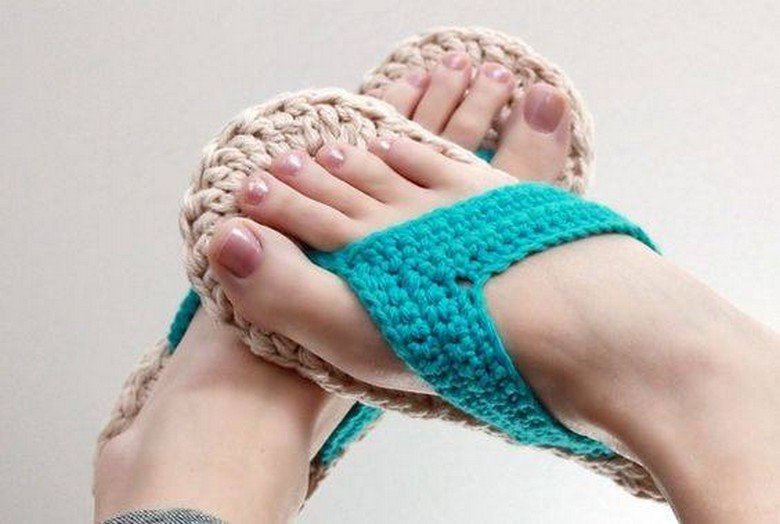 Just look at the slippers and especially pay the attention to the fitness of the upper stripe, despite of being a slim patch of crochet it just had to be perfectly sizes or else would have been simply useless. So you can never compromise on the measurements in this specific project. 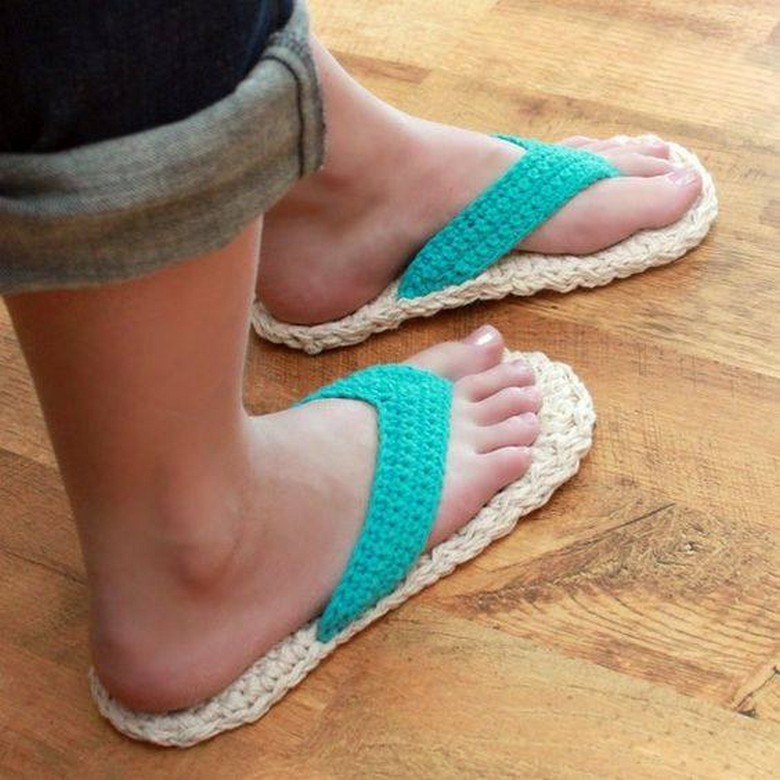 Although this design best suits to the grown up ladies but just to make it acceptable for all we have chosen a shade that would aid and complement to the swagger and attitude of all young ladies so this would automatically become acceptable for all of them.

This is a very nice pair and inspired from some Asian designs. Although here in the Europe too we do have many similar inspirations but this basically originated from typical shoe making that was probably inspired from the crafts. A complex stitch pattern is followed here that can only be digested by some very skilled crochet crafters. 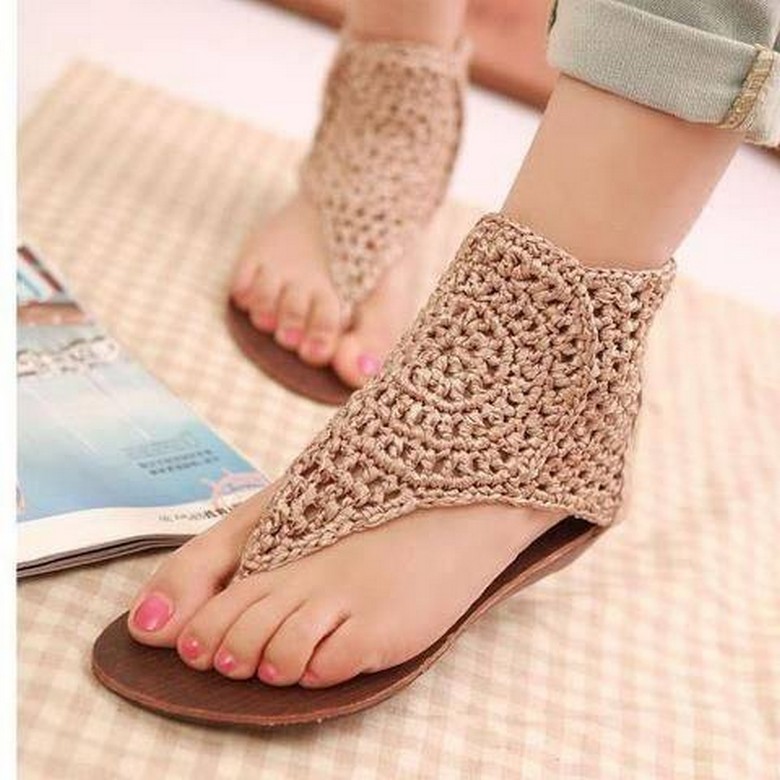 These extra comfortable sandals could be carried casually and semi formally as well. They seem a bit out of shape from the palm side, this is because of the soft reclaimed sole or else it was meant to stay erect and perfect tight as we didn’t compromise over the measurements, this is actually about the base or sole of the pair. 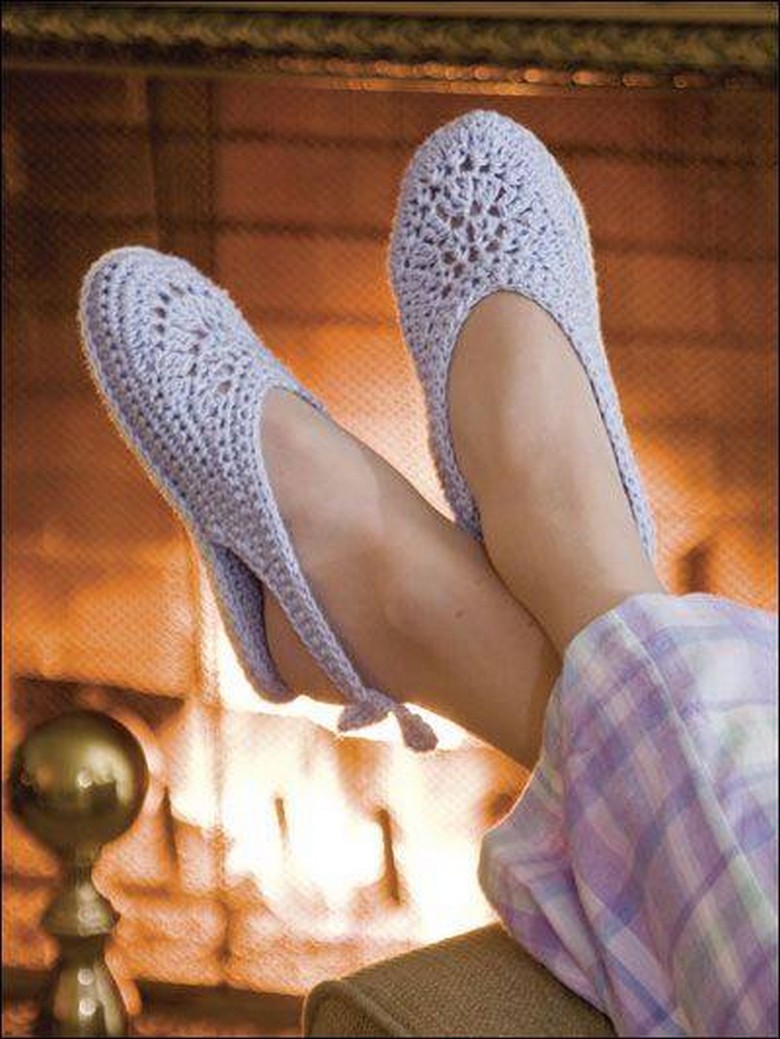 Just imagine any style of your choice and you can start working on it, or may be some of your favorite that was broken too early and you still wanted it, you can try the same upper on the reclaimed shoe sole to have the same feeling over and over again. 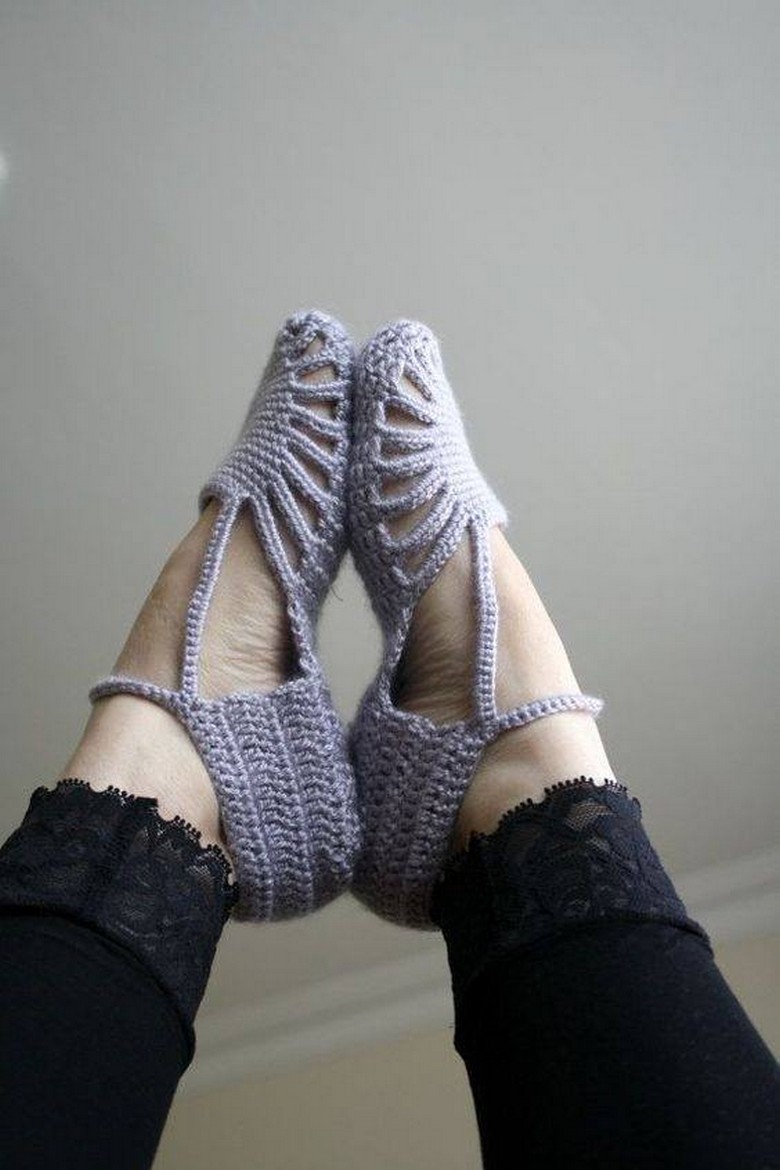 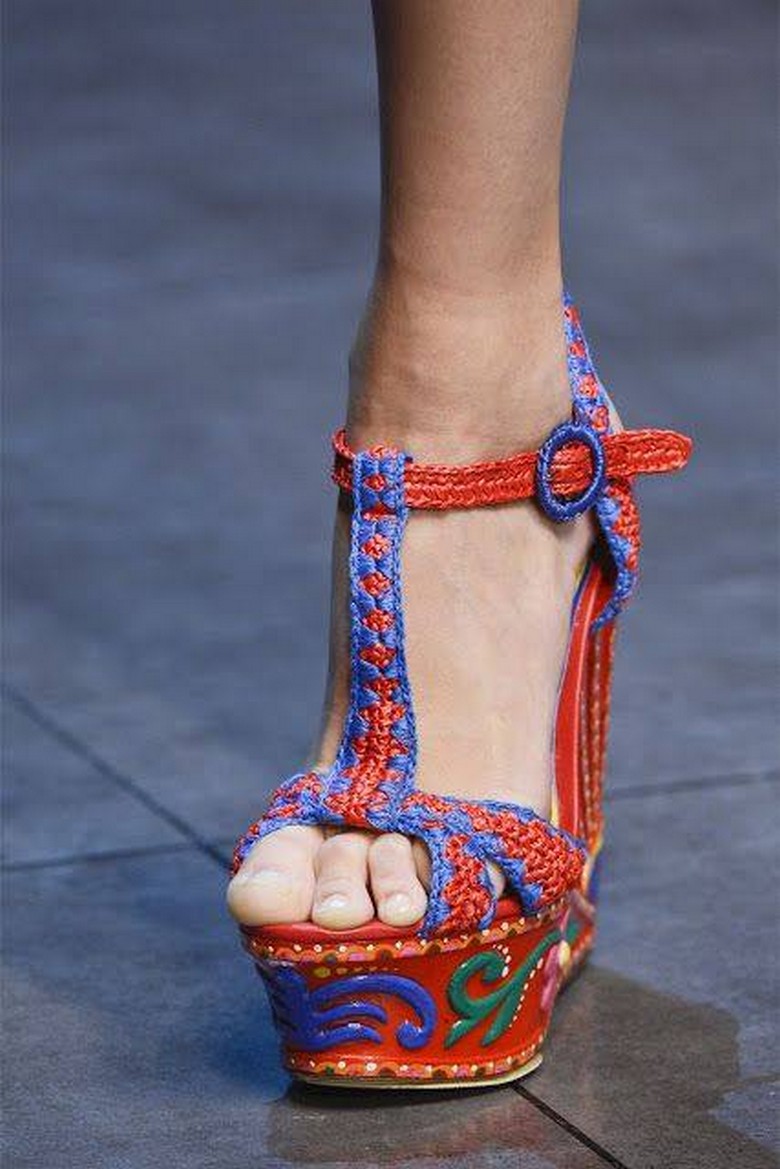 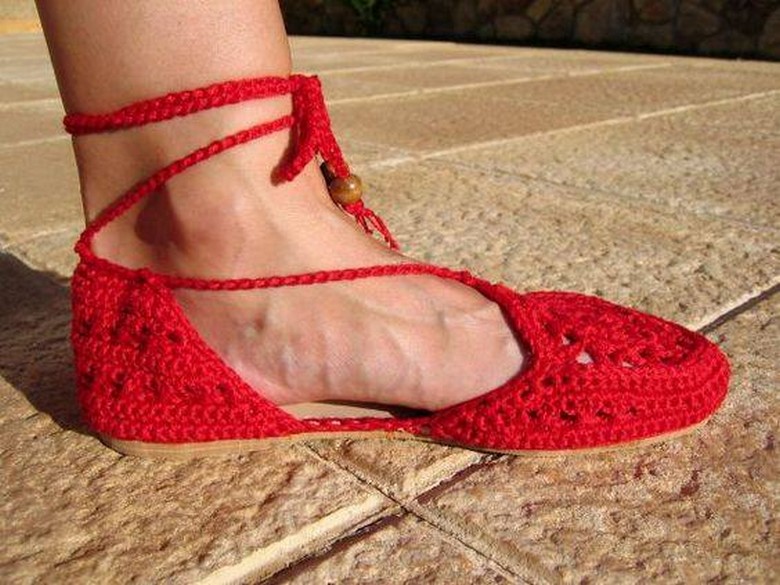 Warm Your Body with Crocheted Poncho

Crochet Purses Made by Rosalina Lee